A Wireless and Digital Way To Monitor Your Fermentation 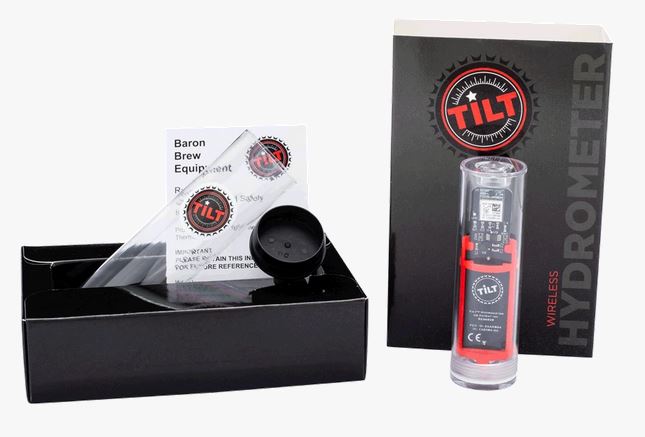 The more beer I brew, the more addicting it becomes. The concept appeals to me on a personal level because I am fascinated with the brewing process, and how just four basic ingredients can make so many different styles and unique flavors of beer.

Brewing your own beer is simple, but sometimes hitting your numbers right can be challenging. For advanced brewers, it’s way more scientific than most people imagine.

That’s why the Tilt Hydrometer is so cool. The company behind the device promises to make home brewing more manageable and reliable by using the latest sensor technology.

But is it any good? And will it make a difference for the average DIYer? Let’s find out together in this Tilt Hydrometer Review.

Why Consider Using a Tilt Hydrometer?

The homebrewing movement is more popular in the United States and throughout Europe than it ever has been before. It seems that everyone wants to try it out and see whether they can cook up a fantastic batch of beer in their home brewery. But until recently, there were technological issues.

In theory, bubbles in the airlock means that CO2 is escaping and fermentation has started. Then when the bubbling stops, fermentation is finished and it’s time to bottle.  But airlock activity is not always the best way to tell.

Most homebrewers can use a standard glass hydrometer (if they use one at all) to monitor the fermentation process, and then get a final gravity (FG) reading so they know the alcohol by volume (ABV) of the beer.

And this inaccuracy can lead to lots of brewing disasters and wasted effort, but using a Tilt digital hydrometer can solve these problems.

It is a tool that targets two kinds of people: those who were reluctant to buy more expensive equipment in the past and those who make rookie brewing mistakes.

The product’s primary appeal is that you’re able to monitor your beer’s temperature and density without having to open the fermenter or wasting precious beer by using a test tube and traditional hydrometer. We all know that oxygen is a big fat no no when brewing beer.

You just simply allow the device to collect the information, and it’ll tell you if there’s a problem.

The main innovation isn’t just the technology, but the price for what this product does. Tilt offers the device so affordably that it is a worthwhile purchase, even if you don’t brew on a regular basis.

A Quick Glance at the Tilt Hydrometer

The Tilt Hydrometer is a two-in-one device that tracks and records your brew’s temperature and specific gravity (density). It uses a Bluetooth 4.0 signal to send updates to your devices continually. You can then optionally upload the data to the cloud through Google Sheets if you choose.

The technology is pretty much fool-proof.  Drop the Tilt into the fermenter and then let it start doing its thing, but don’t forget to make sure it is sanitized first.

The transmitter is strong enough to send signals through the thickest walls of whatever fermenting vessel you are using, including stainless steel, meaning that you can avoid opening your fermenter when you don’t need to.

Thankfully, with better range, it will give you more options for where you do your primary fermentation.  You don’t have to annoy everyone in the house by setting up your brewing buckets or conical fermenters on the kitchen table.

You should note, however, that the device doesn’t control the brewing process directly. So while it might have lots of smart sensors, it doesn’t guarantee a better brew. The physical task of making great beer is still up to you.

The wireless Tilt Hydrometer comes with a variety of features that makes it an undoubtedly improvement over many other products on the market right now.

When brewing beer at home, you don’t want to move the fermenter closer to the router, just so that the wireless hydrometer gets a signal. I want the range to be comparable to other home WiFi-connected devices. Dragging fermenters up from the basement or the garage is a chore you can do without.

For this reason, Tilt increased the range of the new hydrometer. They fitted a more powerful Bluetooth transmitter, which it says can penetrate most fermenters. So far, I have no reason to doubt them.

Now you can simply hook it up to your mobile phone or tablet and track your brews anywhere in the house.

Tilt has also been busy working on the sensors themselves. Many people have complained about the accuracy of other affordable hydrometers in the past. They simply didn’t have the kind of granularity or reliability you needed to get a real accurate reading.

This new device remedies those old issues somewhat. The thermometer has a 1° F accuracy, and the hydrometer now offers specific gravity accurate to +/- 0.002 within its range of 0.990 to 1.120. The temperature sensor is still not perfect. But the specific gravity accuracy is right on the money – a benchmark for other products in the category.

These improvements mean that it’s worth paying a bit more for a piece of brewing equipment you know will do what you need it to do. You could get a cheaper hydrometer, but you’d forfeit the greater accuracy.

Each unit comes calibrated from the factory and ready to go out of the box. The factory settings are helpful because you don’t have to make any time-consuming adjustments when you take it out of the box . If you’re new to the homebrewing and think it’s too confusing, it’s pretty much plug-and-play.

Generally, it takes between 4 to 6 weeks to brew a decent batch of beer. So, any hydrometer you buy needs to last at least that long without failing or running out of power.

So how does the Tilt Hydrometer fare?

Well, the answer is “quite well.” The Tilt made substantial efficiency improvements to the latest iteration designed to make it far more consumer-friendly.

In the past, the batteries in the older models would last about 3 months, but the newer models now lasts much longer, uses less power, and allows you to brew more often without the need to change batteries.

Finally, the Tilt Hydrometer comes in a bunch of colors. They all look really good, but to be honest, Tilt was going for aesthetics here. The colors have a different meaning.

If you want to brew a single batch, it doesn’t really matter which color you choose, so just pick your favorite color.  However, if you want to monitor two or more brews concurrently, you need to buy a different color. You can’t record outputs from multiple devices of the same color simultaneously.

For many people, that’ll seem a little strange. But it is currently one of the limitations of the device. If you want to do two brews at the same time, you need devices of different colors. Again, it’s not a big deal – ordering different colors is easy.

How Not To Use The Tilt Hydrometer

Just so you don’t make the same mistake as many other Tilt users have in the past, have a look at this quick video before you actually use it.

When it comes down to it, making beer is a science and a numbers game.  If you have the opportunity to upgrade a piece of brewing equipment that can help during the long brewing process, it’s wise to consider it if you can afford the cost.

For many homebrewers, adding to the brewing toolbox is a common theme.  Buying a wort chiller to cool the wort faster, investing in a single vessel conical fermenter, or a bench capper for faster bottling are a few of the upgrades that make the list.

So why not a Tilt Hydrometer too?

The Tilt Hydrometer solves several problems for anyone wanting to brew beer at home. It keeps track of the brew’s temperature and density, so you always know what’s going on inside without looking inside.

The addition of a more powerful Bluetooth transmitter is a welcome addition indeed. And unless you live in a mansion, the Tilt Hydrometer can communicate with all your devices no matter where you are in the house.

Finally, the Tilt Hydrometer also solves a longstanding issue in the homebrewing monitoring market – equipment costs. The price is now affordable, opening up the market significantly. It’s worth considering if you didn’t want to pay high prices in the past.

Your glass triple-scale hydrometer can still be useful in your home brewery, so I don’t recommend you throw it in the trash, but once you try a Tilt Hydrometer, you will never look back.

Check out the Tilt Hydrometer here!