Beer Drop Is Focused On Finding The Freshest and Best Selections Of Craft Beers, Brewed In The State Of Colorado, and Delivering Them To Your Front Door.

Beer Drop is a monthly subscription beer box that ships a wide variety of craft beers and special releases that are not readily available to the general public.  Just so you get the best selections every time, Beer Drop uses an algorithm to help select the best beers to match with your particular preferences and tastes.

With Beer Drop, you have complete control on what beer styles you want each month, as well as deciding on when you want the shipment to arrive.

The whole idea of joining a subscription based beer club is to try new styles of beer you normally wouldn’t have access to.  With Beer Drop, you get to select 5 different styles of craft beer that you want to try.

You can mix and match and create any combination you desire, but you don’t have to.  If you feel like choosing all lagers or all hoppy beers for a particular drop, you can do that too.

Although Beer Drop will make the recommendation of which beer from each category will be included in the box, you will be able to customize the order before it is shipped. 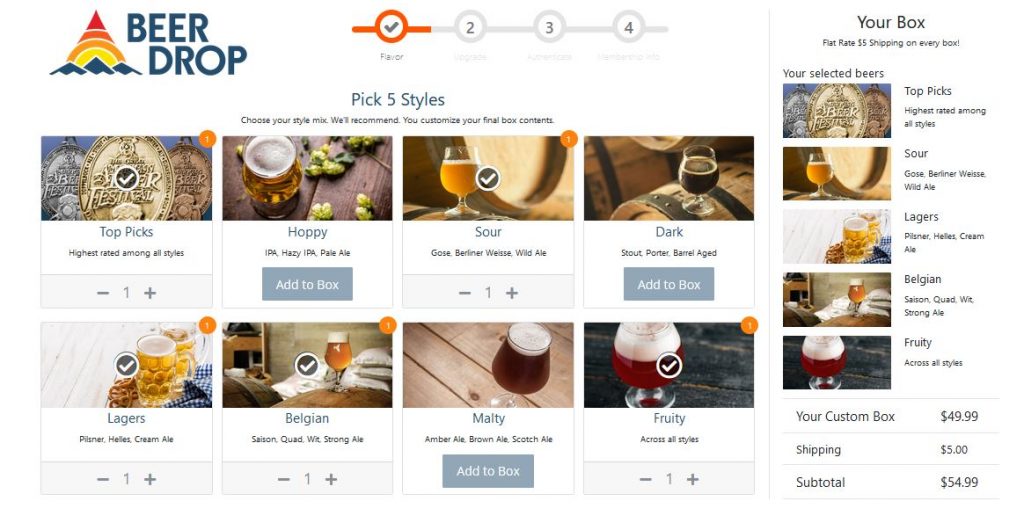 How Much Does Beer Drop Cost?

There are three different subscription levels to choose from when you sign up for a Beer Drop subscription box, starting with the simple basic plan.  Each upgrade will bring a little more flexibility to that particular plan.

Some orders can get you a free gift like a hop exploration box or a t-shirt.

“Beer Drop” is the most basic plan that is offered, but it also comes with the least amount of flexibility.

You will receive 10 beers from 5 entirely different breweries.  Your months selections will be based off of your 5 beer styles that you choose

Unfortunately, you are not able to swap out beer selections with the standard Beer Drop plan.

Beer Drop “Plus” is the middle of the road membership and and upgrade to their cheapest basic plan, and is also their most popular.

You still get 10 beers from 5 different microbreweries based off of you personalized recommendations.

Once you place your order, you will receive an email letting you know what selections where chosen for your order. If you don’t like what you see, you have up to 24-hours to swap out any of the beers you choose.

You can also upgrade two choices to their taproom or special release beers. While browsing through the beers that are available, you may want to add additional selections to your order.

With the flat $5.00 shipping on all orders, you won’t be charged any additional shipping fees, but you will have to pay the difference for the extra beers you added.

The final plan is Beer Drop “Ultimate” which gives you the most flexibility, but also comes with the highest price tag.

This plan is almost identical to the Beer Drop Plus Plan, but gives you the freedom to upgrade any and all selections to their taproom and special releases of unique beers.

How They Make Their Selections

Every Monday, the experts at Beer Drop use their proprietary algorithm to choose the highest, top-rated beers available.  But they make sure your drop are always new beers, and not the same beer you have received in the past.

This beer selection process ensures that you will get a new and fresh subscription box with every future order.

One perk that Beer Drop offers that others don’t, is their rewards program, which allows you to earn points of different values for referrals or purchases on their website.

Whether you are buying for yourself or a gift for someone else, you will earn points that can be redeemed for future purchases, even if you use a Beer Drop Coupon code.

Not only do you collect points for purchases, but you get extra points just for creating an account, sharing or following on Facebook or Instagram, referring a friend, reviewing a product, and a birthday bonus too.

What To Expect When You Join Beer Drop

The main take-away from this craft beer club is getting to try new beers for as long as you wish. Upon joining, you will have complete control over your your monthly beer preferences and the length of your membership.

All of the beer selections are chosen from their personal preferences and rating. But fortunately, when their suggestions are not what you are looking for, you have the option to “swap out” your beer.

When you join the Beer Drop Plus or Beer Drop Ultimate membership, you are able to replace the recommended beers with any of the other 200+ beers that you come across on the Beer Drop website.

If you are going to be out of town or haven’t finished all the beer from your previous order, you can always pause or delay your order until the following week, or just skip the entire month completely.

As far as the membership is concerned, if you are worried about getting stuck with a long-term commitment, don’t be.  You are free to keep your shipments coming every month for as long as you wish, and then cancel when you need to take a break or think you had enough.

To be honest, I have not needed to contact their customer service department yet because my order arrived on-time and was prepared to try any beer that I received.

However, I do know that Beer Drop offer a 100% satisfaction with all of their customers.  You can reach out to them through email, or through a chat box.

The cost of shipping is pretty straight forward with this beer subscription.  All orders, no matter how big or small, costs just $5.00.  Other similar clubs charge up to $15.00 for shipping.

If an order is placed before each Tuesday during the week, the order will be packed and shipped out the following Saturday.

Just remember that someone who is at least 21 has to be there to sign for the delivery.  The courier will attempt to deliver the package up to three times before it is shipped back.  If it’s returned to Beer Drop, you will be responsible for a $20.00 re-stocking fee, so make sure someone is there.

What's in the Box?

It doesn’t matter what plan you choose, you will always get 5 new and fresh beers from different breweries.  The basic box will include 10, twelve-ounce cans of premium beer that was brewed in Colorado.

The middle plan, or the Beer Drop Plus, will have a mixture of 12-ounce, 16-ounce cans, and 32-ounce crowlers. These selections will include some taproom exclusives, and special releases that won’t be included in the basic plan.

And finally with the Beer Drop Ultimate plan, you will get all 16-ounce cans and 32-ounce crowlers.  These will also include taproom exclusives, along with their 100% special release “flavor bombs” as they say.

Also with every shipment box, a beer description list with tasting notes will included too.

Who Should Join/Who is it Best For?

Of course Beer Drop is for any beer lover you enjoys trying different styles of craft beer that are not readily available in their local liquor store or favorite pub.

The best part of joining any beer of the month club is opening up the box and seeing what beers you get to sample that month.  A beer club gives a beer drinker the chance to move out of their “go to” beer comfort zone by trying something new.

Whether this beer subscription box is for you, or a special gift for someone else, having the freedom to choose your favorite beer styles and have them delivered to your door just can’t be beat.

How Does It Compare To Other Beer Clubs

Although most beer clubs are similar to each other, there are a few things different with Beer Drop when comparing to other clubs.

Besides the flat $5.00 shipping on all orders, the beer only comes in aluminum cans, so there is no alternative if you want a few bottle selections too.

Since Beer Drop is based in Colorado, which is home to lots of great microbreweries, every featured drop comes from the Rocky Mountain State.  So if you are looking for a beer selection of international varieties, or east/west coast favorites, you are out of luck.

The main thing I like about Beer Drop is they allow you to swap out their recommendations with your own choices before the order is shipped out.

But if you want to check out a few other options before making your decision, have a look at our Best Beer of the Month Club review page just to see what other clubs are offering and their prices.

As you probably already know, there are numerous beer clubs to choose from, each with their own unique beer styles, but Beer Drop is a great beer of the month club to try.

You shouldn’t have to commit to more than 2 or 3 months the first time around, no matter which club you choose, unless you already know what you want.

Starting with just a few monthly shipments will give you a reasonable chance to see the variety of craft beer, and taste the quality of the beer you receive before extending the subscription.

Yes, all these beers come from Colorado, but there are enough micro-breweries scattered throughout Colorado, that it would almost be impossible to try them all. 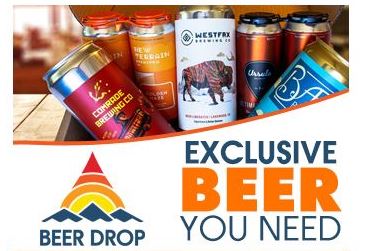 It really doesn’t matter where the breweries are located, or if they are bottles or cans,  If you want to try a beer brand you never had before, give this monthly beer club a go.

A beer subscription box is a great gift for yourself, or any other beer lover in your life.  Go ahead and give Beer Drop Subscription Box a try.