Focused On Finding The Best Craft Beers That Are Only Brewed Here In The United States, and Delivering Them To Your Front Door. 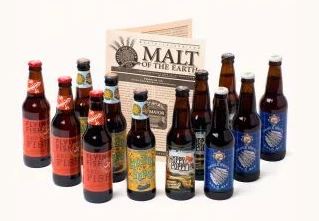 When we did this  U.S Microbrewed Beer Club Review, we did our, ahem, diligent research on why this beer club was at the top of the beer subscription list.

In most towns, the local liquor stores and bars have a large selection and a wide variety of craft beers, but we know there are so many more out there. More than we could probably try in a short lifetime.

So how do you try so many delicious and hidden gems that are waiting for you to try for the very first time? The answer and the best way to get exposure to these new and obscure great tasting brews is to join a craft beer club.

A family owned business, The U.S. Microbrewed Craft beer Club first started shipping unique craft beers to the front door step of beer lovers way back in 1994.  This particular beer of the month club is only focused on finding different craft beers from just the United States, and getting them to you each month.

This particular U.S. Microbrewed club focuses solely on domestic craft beers.  In addition to this club, they also have four other monthly beer club options which consist of international beers, hoppy beer, hard to find beer choices, and a combination of both U.S and international choices.

The U.S. Microbrewed beer version, as its title suggests, only delivers beer from microbreweries based in the United States. Each month (and subscriptions run from two months to indefinite) feature a 12-pack of beer from two different breweries, highlighting three different styles of beer.

Who Is The Club For?

If you are a beer drinker and want to slowly move out of your comfort zone, trying something besides your usual and nationally distributed lager that comes from a mega brewery, you might want to give a beer of the month club a try.

It’s pretty obvious just walking through your local liquor store, or down the isle at the grocery store, just how many styles of craft beer there are.  Everything from traditional Lagers, to American Pale Ales, to Stouts, to Brown Ales, to IPA’s, to everything in between.

Wouldn’t it be nice to try a new style or flavor of beer without spending money on an expensive twelve-pack of craft beer, only to find out you don’t like it? Unfortunately, that is often the only way if you want try one of the hundreds of styles of beer that line the shelves.

The advantage of joining a beer club is that you will get to try a wide range of various craft beer styles each month, without committing to a large quantity or a certain style, and not spending money on six or twelve beers that you don’t like.

What Does The Monthly Membership Include?

When you join the U.S Microbrewed Beer Club, your membership will include the following:

What Is The Beer Selection Process?

Their slogan is “We drink a lot of beer, so you don’t have to”

Although there is a group of brewmasters and judges who sample hundreds and hundreds of craft beers from around the country, only about 20% of those are deemed acceptable and shipped to their monthly members.

All of the beers are judged and tested on many different indicators, and they are:

If they find any of these things lacking, they will not be included in the monthly shipment.  Now to be fair, that doesn’t mean that you will like the taste of each beer that you receive, because everybody’s taste buds are different.

Things To Consider Before Joining a Beer Of The Month Club

The club doesn’t require much of a commitment to join. Memberships can be as short as two months and as long as a year, or recurring. Once selecting the duration, then you can select how frequently you want to receive your beer.

Shipments can be sent once a month, every other month, or quarterly (every three months). Billing can either be all at once up front, or with each shipment. There is no penalty or extra cost for breaking up payments with each shipment.

In addition to the beer there are a few other perks: each shipment arrives with a monthly newsletter which contains beer profiles, brewery histories, detailed tasting notes, and even suggested food pairings. If the membership is three months or more then they will throw in a free bartender’s bottle opener.

Beer clubs are wonderful, if you are an avid beer drinker who enjoys experiments. There are benefits and drawbacks to joining these type of clubs, and you must consider both sides before deciding if this commitment is enough for you.

Not A Deal-breaker But Something To Think About:

Recent Selections Of The Beer Club

Every month, the styles of the beers and the microbreweries where they come from are always changing.  The beer selection itself is amazing and varied.

The overall variety is fantastic and the quality of beer was very high, even for the flavors that aren’t my go to when I select beer myself. Plus, it was pretty cool to taste beers from other breweries that were not on my radar.

Okay, you like the idea of a beer of the month club, and you are intrigued by The U.S. Microbrewed Beer Club, but you wonder if maybe there are other options.

The U.S Microbrewed Club is just one of five subscription based clubs that BeerMonthClub.com offers.  Besides this beer club, they also offer four other monthly beer club options, and each one focusing on domestic and international craft beers of different styles.

If you are interested in a beer club as a gift for someone else or yourself, but don’t think the U.S beer club is the right choice, check out our reviews of the other beer of the month clubs, or think about one of these different options below.

If craft beer is your thing, especially craft beer from the United States, this beer club will enhance your drinking pleasure and your knowledge of craft beers from all over America.

The U.S. Microbrewed Club is a fantastic choice and introduction to the extremely wide variety of beer choices from across the the country, and is a great way to explore our nation’s craft brewery scene without leaving your home.

On top of their wide selection of craft beer choices, every membership has a 100% satisfaction guarantee.

P.S. This club is just one of the 6 unique specialty clubs in the MonthlyClubs.com family, which also has subscriptions for lovers of cheese, wine, chocolate, cigars, and flowers.