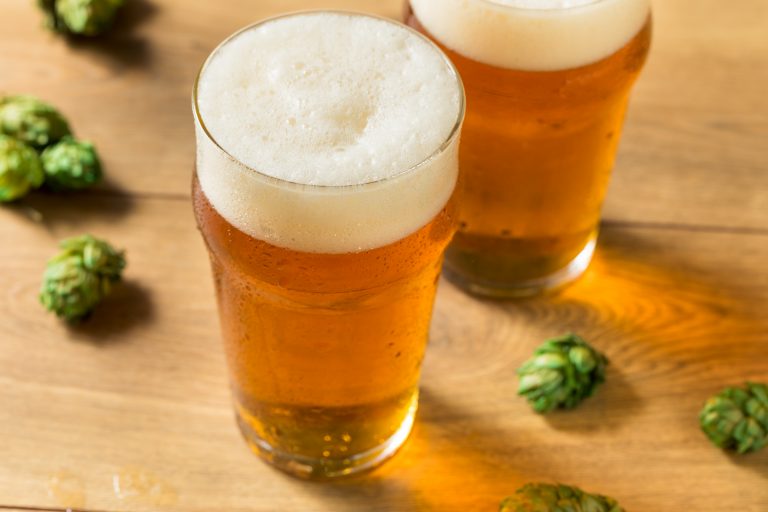 If there is one style of beer that benefited from the microbrewery and homebrewing explosion of the past 30 years, it would be the IPA, or India Pale Ale.

IPA’s are a one of the newer varietals in the craft beer industry.  Their depth of flavor from the many types of hops that are used during the brewing process continue to win over numerous beer fans.

The history of IPA is almost as rich as the beer itself, and after sampling MANY here is a list of what we personally think are the best IPA beer brands.

Our Top 10 Favorites and the Best IPA Beer List

Here are some of the best IPA’s that can purchased today. This is, of course, a highly subjective list and there are many that were omitted.

To keep this list controlled, we focused solely on only American IPAs. Regardless of the sample size, there is no debating that these are some of the best of the best.

How good is this one? Bell’s Two-Hearted Ale is VERY good according to the American Homebrewers Association which voted this the best beer in the country… for three years in a row. A rare IPA in that it uses 100% Centennial Hops.

Like many IPA’s it has a nice hazy golden color with a large fluffy head that leaves some decent lacing.  The aroma is of citrus and has a bit of a pine smell, and the taste is similar to the aroma with moderate bitterness.

This 60-Minute IPA from Dogfish Head is easily one of the greatest contributions Delaware has made to the alcohol community, this beer gets it’s name for the length of the boil in which hops are continually added. This beer has been a staple in the Dogfish lineup for years, and in 2017 won a James Beard Award.

It has a nice orange/amber color with a white head that quickly fades, leaving behind some decent lacing on the glass. The amount of hops used is dominant on the aroma, but not overpowering. The taste is of citrus and hops, and crisp. 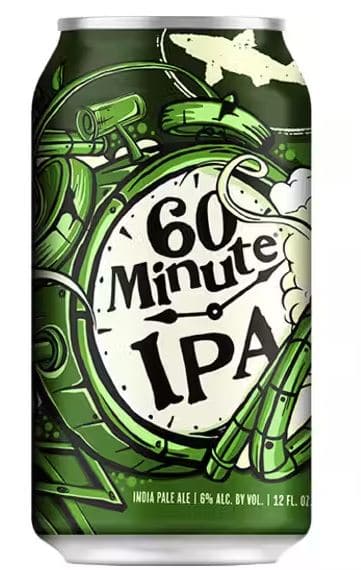 Lagunitas IPA Ale is a perfect marriage between bitter hops and a malty caramel body that moves into slight citrus flavors. A high quality, fairly low ABV (for an IPA at least) that is available almost everywhere, thanks to Heineken buying the brewery in 2017 (they bought 50% four years earlier).

It has a slightly golden amber color with an average white head with good lacing on the glass. Upon opening the bottle, the aroma of citrus and floral notes will hit your nose.  The taste starts as a fruitful citrus and fades to a moderate hoppy bitterness.

This Brooklyn East IPA became a year-round offering in 1996 and successfully blends British tradition with East Coast innovation and ingredients.

There is a pale amber color that pours with a minimal head that is almost non-existent, with hardly any lacing. It features juniper and citrus peel and stone fruit hops. A toffee malt flavor hits first, leading to a clean hoppy finish.

One of the originals in the modern IPA field, this Goose Island IPA is still one of the best.

A bit more piney and bitter than more recent beers, Goose Island uses more resiny hops that leaves a grapefruit citrus taste and a bit of bitterness. It does have a nice golden amber color with a large white foam head that hangs around for a while.

In 2009 Sierra Nevada invented a dry-hopping device called the Hop Torpedo, hence the name of this extremely flavorful beer with a nice overall bitterness.

It’s darker than most IPAs with a burnt orange color and pours a small fluffy white head with thin lacing, and the aroma is of hops, citrus, and pine.

This Sculpin IPA is an American IPA and part of Ballast Point’s flagship series. The Ballast Point Brewing website says this beer has won 29 beer awards.

It pours hazy golden orange with a nice off-white foam head.  The aroma is a fruit and pine scent, and a big fruity smooth taste.

In business since 1997, Russian River’s Vinnie Cilurzo is widely regarded as one of the most innovative craft brewers in the game, and Blind Pig has won multiple Great American Beer Festival Awards.

This very hoppy beer is full-bodied and has flavors of citrus, pine, and various fruity notes, leading to a lovely dry and bitter finish. It pours a bright golden color that retains its thick foamy head.

Even though Elysian Brewing was acquired by Anheuser-Busch in 2015, this beer still kicks and satisfies. This Space Dust IPA has a malty sweetness scent and has a bitter taste that gives way to a brighter citrus fruitiness.

It pours a golden color with a thin head and minimal lacing. With a higher alcohol content than other IPA’s, this craft beer straddles old-school British IPAs with the newer fruity and hazy IPAs.

Sierra Nevada makes the list again with its Hazy Little Thing IPA. Hazy Little Thing was named by VinePair as their best beer of the year in 2018. This IPA’s aroma is very fruit forward, mixing up mandarin, mango and pineapple flavors.

When poured into a glass, it has a hazy golden color (as the name would suggest) with a decent white foam head with a little bit of lacing.

The History Of The IPA

This beer emerged at the height of the British Empire. In the late 18th Century Britain’s empire stretched all across the world. British soldiers, sailors and diplomats ALL wanted beer. India was one of the most important parts of the empire but was unfortunately too warm for brewing, so the beer had to be shipped there.

London brewer George Hodgson used his connections to dominate the market. He knew that the journey was long, so he brewed a beer with extra hops with a higher alcohol level, both of which were preservatives, keeping the beer fresh for its long journey.

IPAs and other British ales quickly became popular in the colonies, and Americans loved their British beer long after independence. The popularity grew until Prohibition, and beer all but vanished from the landscape.

With the emergence of micro-breweries throughout the years, IPAs have been on the rise. Local ingredients in the U.S. made the IPA recipes stand out in the budding beer market. Sonoma California’s New Albion Brewing was one of the first to make IPAs, but it was San Francisco’s Anchor Brewery which created Liberty Ale in 1975, qualifying as the first modern American IPA.

In fact, in recent years, the winner of best beers in America have generally been all IPAs. Frequent winners include Bell’s Brewery’s Two-Hearted Ale, Russian River Brewing Company’s Pliny the Elder, and Goose Island IPA.

The Different Types Of IPAs

Traditional IPA’s are heavy on the hops, so they taste malty and bitter, and usually have a higher alcohol content than other styles of craft beer.

The IPA name is a broad category of many types of India Pale Ales.  Under the main category, IPA’s have expanded into a number of different and delicious sub-categories, and each style has its own unique characteristics.

And this list keeps expanding. All these share a hoppiness but otherwise contain differently sourced ingredients, ABV levels, and brewing methods.

Where To Find These Popular IPA Beer Brands

If you are a craft beer drinker but not a fan of IPA’s, you probably just haven’t found the right one yet. While many IPA’s tend to be higher in alcohol than other beers and more bitter, there are just too many styles and varieties of IPA’s to not find one that you like.

Depending on where you live, many of these popular IPA beer brands listed above, along with many other good IPA’s are nationally distributed and can be found at your local liquor store.

If you are interested in trying one or more of these IPA’s, but having trouble finding them, one option is to head over to Drizly.com and see if the beer can be ordered online and delivered to your home.

For those of you that love their hops and everything about an IPA , the Hop Head IPA Beer Club might be what you are looking for.