What Is a Flight of Beer? It’s The Best Way To Sample Different Styles Of Craft Beer 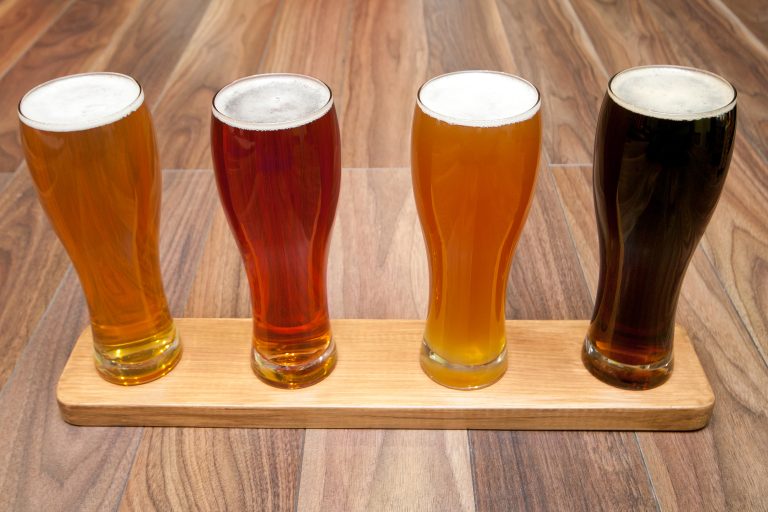 All right. You’re looking at the pub’s menu, and you don’t want to sound ignorant or uncool, so you’re on your phone and you want to find out what is a flight of beer anyway? Fortunately, you are in for a treat.

A beer flight is the best way to sample multiple beers, in styles you may not be accustomed to. Becoming acquainted with a beer tasting flight is one of the fastest paths to leveling up your knowledge on the drink we all know and love.

Let’s break into this guide and beef up your small talk skills and impress your friends the next time you’re at the bar or local micro-brewery.

The History of Beer Flights

How long have flights of beer been around? Like a lot of cool things that people just started doing, we aren’t actually sure. Sampling has been a culinary custom for a long time.

This practice is more common at wineries, where tasting is a major part of the culture. At some point, though, craft brewers caught on and knew exactly what they were doing when they designed the first beer flight paddle.

It’s easy to imagine this came about entirely because some smart brewery owner was tired of pouring sample after sample before someone chose their drink and thought, “I could make this into a valued service/menu item”. And then, the beer flight was born!

The word “flight” certainly seems like a strange one though, right? Why not just a sampler? Or a taste test? Or something that makes sense?

There are two ways to look at the word flight and see how it works in this situation.

A “flight” of birds would be a group of birds flying around together. This is like a group of beers joining together on that glorious beer flight paddle.

Another way we commonly use the word flight is for a flight of stairs. On a beer paddle, this can be compared to how we step up each drink as we go along. While we’ll talk about this more below, beer flights are usually arranged from lightest to darkest. So you’re taking a step up the color spectrum with each sample.

What You Need to Know: Beer Flight Basics

While there are some basic givens on a beer tasting flight.  The beer glasses should be served on a paddle, have at least three drinks, and should be smaller than a half pour each.  Many brewers take a lot of liberties here.

Some go super straight forward, while others get fairly creative. Some breweries are very specific about how they feel their brews should be sampled, while others give the customer a lot of freedom in their choices.

Below you’ll find some basic information on what you can expect when you visit a taproom or brewery.

This is going to always be a touch of a surprise. The most common thing you’ll see are either straight glasses, like water glasses, or pilsner shaped glasses. They’re often smaller and hold pours of three to six ounces.

Some breweries will actually use their full-sized glasses for their flights, but just full them part way.

Then there are the more fun options, like tiny, classic beer mugs or glasses with etched designs. If you’re selecting a flight for home use, it’s often wise to buy the paddle and glassware as a package, so you know the glass bottoms will fit in the beer flight paddle.

For a complete rundown of all the different types of beer glasses, check out our post here.

The Types of Beer Served in a Flight

At most breweries or taprooms, there will be the option to choose your beers for yourself. They may also have a head brewer chosen option for flights of beer.

We’ll break into why below, but most often a beer tasting flight will be most commonly arranged from lagers to ales, and from lightest to darkest. A full selection may start off with a light lager or a blonde ale, and then most up to a dark porter or a double IPA.

A flight of beer is your perfect opportunity to sample ones outside of your normal wheelhouse, so don’t be afraid to experiment here. That’s the beauty of a beer flight.

The Beer Paddle Itself

Some breweries go simple with this while others like to get fancy. The classic beer paddle is wooden with slots that fit the glasses and a handle, so it looks like a traditional paddle.

You may also see curved paddles, ones branded with the brewery’s logo, and paddles that look like a piece of wood found on a forest floor someone drilled a few holes in. Occasionally, breweries will get metal wires and craft “paddles” that look more like baskets.

When you buy a beer paddle for home use, you can find a lot of traditional options or also find a lot of creative choices out there. The most important thing is that it fits your glasses. From there, you can go as stylized as you want.

How Much Should a Beer Flight Cost?

This will vary a lot depending on the brewery, the number of drinks, and the size of the pours. That being said, beer tasting flights are generally a fairly affordable option.

Breweries price these affordably because they bring in business. They’re an easy way for a customer to discover the drinks they really love, they encourage you to have a great drinking experience with your friends, so you bring more people into the brewery, and are all around seen as a good way to get more people into a brewery and hooked so they’ll return. Why not make them cost-effective, right?

Keep in mind when judging the cost of a flight of beer that the flight size may vary. For example, a six-beer tasting flight of three ounce pours will be priced differently than an eight beer flight of six ounce pours. For the six beer/three-ounce flight, you can expect to see them priced as low as five dollars, but ten dollars is still a reasonable cost in many locations.

How to Enjoy a Beer Tasting Flight

Your beer flight may have as few as three samples and as many as eight. They’ll be lined up from lightest to darkest.

Does that mean you should drink them in that order?

Yes, it does. In most cases, brewers would hate to tell you there is a “right” way to drink, even when they personally have strong opinions on the matter.

That said, if you want to get the most out of a beer tasting, there are ways to go about it. And that first rule is to start with the lightest and move to the darkest. 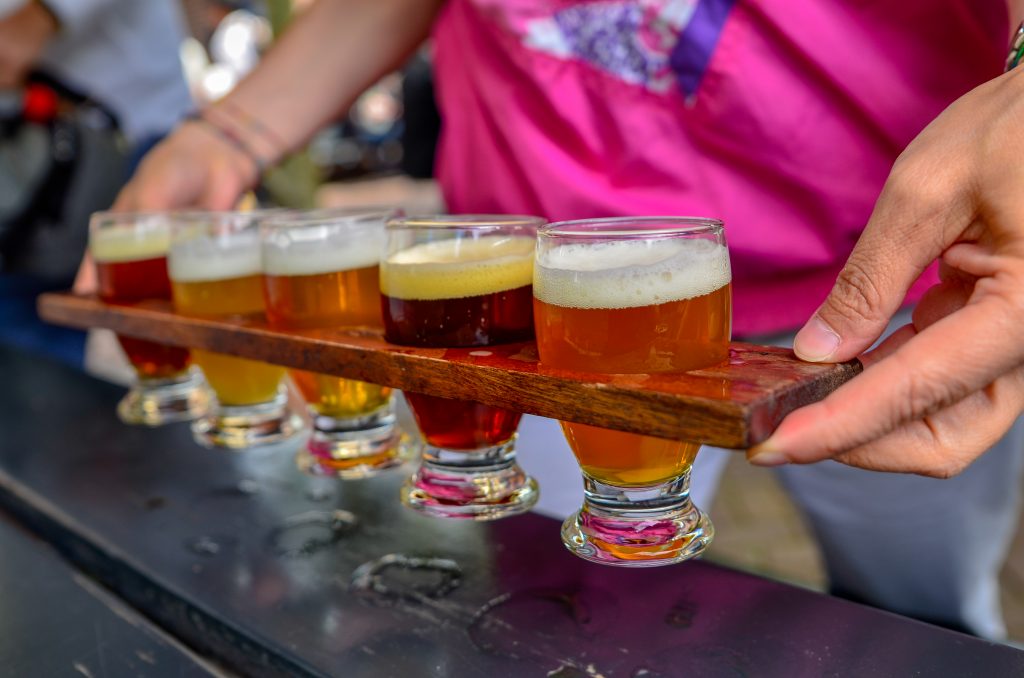 In fact, if you want an insider secret: drink some water in between each sample. This will clear your palate so you’re more ready to take in the flavors in your next sample.

Why do we start with the lightest beer and work our way to the darkest? Because a lighter beer, like a blonde ale, is going to be a much gentler flavor than an IPA. When you’re enjoying a blonde ale, you want to come at it with your taste buds ready to appreciate those subtle flavors. If you drink a blonde ale after a porter, with its strong personality and bold attack on your senses, you’re just not going to notice the finer notes in the lighter brew.

You can compare this experience to becoming nose blind to the scents in a room, or eating spicy foods.

Now, what do you do if you’re drinking a flight all in the same style? Use your best judgment, adn hold the glasses to the light and attempt to judge the color to the best of your ability.

There is also the option to arrange them with ABV, if you know it. In this case, you’d want to start with the lowest ABV and work your way up to the highest. But in this situation, you’re absolutely allowed to just go for it. Having some water in between each drink will really help if you’re prepared to take your time sampling.

Why We Love Beer Flights So Much

Why not ask for small samples at the bar? Why not order a couple pints and just be done with it?

Those are certainly options. But they’re options that miss out on some of the great benefits here.

A beer flight gives you the luxury of time to take in the full taste of each brew. You’re going to learn so much more about the beer itself and your own personal preferences from a beer flight than from rushing a few samples at the bar or drinking pints.

You can do this alone and make notes for yourself, or enjoy a beer tasting flight with friends and learn from each other as you each point out what you’re experiencing. Your friend may have observations you wouldn’t have noticed if they didn’t point them out to you.

A tasting flight is also a great way to experience many drinks without getting two sheets to the wind. If you want to limit how much you’re drinking, but discover what all a brewery has on offer, a flight is the way.

So, what is a flight of beer? It’s a craft brewing experience. It’s a sampling bonanza. Flights of beer are the center of a great Saturday night. They’re a way to train yourself to notice the finer notes in a beautiful brew.

A few flights from now, armed with this guide, you’ll be comfortable explaining the experience of transitioning from a blonde ale to a porter. You’ll wonder how you ever skipped over a flight on the menu, and you’ll be seeking out taprooms that have this option on offer.

No two flights of beer should ever be exactly the same to a craft brewing aficionado.

Grab your friends and order a few beer flights next time you visit your favorite watering hole.